A short time ago, in a galaxy directly in front of your face….

It is an 82-game period of civil war. Rebel Knicks players, striking from the least secret base on the planet, have won four consecutive victories against the NBA Empire. During the battles, Knicks spies managed to steal secret gameplans to the NBA’s ultimate weapon, the SCHEDULE, an armored bastion of unfairness with enough power to destroy even the Golden State Warriors. Pursued by the NBA’s sinister front offices, Coach Fisher races home aboard his luxury jet, custodian of the stolen gametapes that can save his team and restore a .500 record to the Knickerbockers….

Luketaps Skyzingis has hit the rookie wall over his past 4 games, evidenced by his low rebounding totals more than anything else, but his shooting has been off as well. This is largely because, I assume, the young farmhand is using a blaster. But Obi-Carm Kinanthony is certainly brandishing a lightsaber, averaging a .593 TS% during the win streak. This is the weapon of a Jedi Knight: not as clumsy as a blaster, an elegant weapon, it has been used effectively for 1,000 generations (err, 4 games) against the agents of evil.

In a universe where shooting with a blaster is apparently never practiced by an entire army of Imperial Stormtroopers, there is one man who seems immune to the Helen-Keller-with-broken-hands-aiming-capabilities of the most inept army ever assembled: Haaronn Soflallo, a cunning mercenary and gun for hire for the majority of his career. Sure, he’s gonna pay Jabba that money he owes him, but he doesn’t have it right now. Sofllalo is averaging a bonkers .705 TS% during the win streak, and one thinks his return to Port Eisland may have inspired the recent outbreak in steady aim. Either way, he escaped capture once again in the it’s-what’s-on-the-inside-that-counts (AWWWWW!) Millenium Falcon and is willing to aid Obi-Carm Kinanthony in his moral and physical training of Luketaps Skyzingis on their way to MSGderaan.

But their plans have changed, alas, as MSGderaan was extinguished when millions of voices cried out in terror and were suddenly silenced (the end of a game happens quick ’round these parts). A road trip looms after Monday, of the 7-games-in-9 variety, all against teams currently over .500. This will be the most harrowing journey yet for our band of heroes and will prove whether or not they are as good as they’ve looked against inferior competition. Luketaps will need the training of his two companions desperately to improve upon his budding capabilities, and they may need to carry him through this mission. Robby Lobacca will need to provide the muscle and indistinguishable howls containing hints of his emotional state on defense, and Jose Cal3PO will need to continue to beg for help from his more capable friends throughout the entire length of the trilogy (the season is 1/3 over, see what we’ve done here?!?!?!?!?).

Looking to the bench, we have an underrated (although increasingly less so as he gets more screen time) mercenary coming into his own looking for a fat contract. Lanoba Fetthomas (okay the name is terrible, someone do better in the comments) is 13th in the league in TS%, averaging an awesome .595% for the season thus far. He was 2/2 from 3 again last night, because Fetthomas always gets his mark (until he is eaten by the Sarlacc, otherwise known as the regression to the mean) and is playing in a contract year. Fetthomas doesn’t kill for free, Jabba.

And an oft-forgotten faction of Rebel supporters, who last year resided on the forest moon of Endorlando, have Power-Rangered themselves into one superorganism named Kylewok O’Quinn, the galaxy’s largest Ewok. He has averaged 13 rebounds per 36 minutes over the last 4 games as his minutes have increased off the bench, and it’s no surprise this giant Ewok has a knack for doing the dirty work. Okay, sure, I barely spoke of last night’s game. But what is there to say? The Knicks controlled the game nearly wire-to-wire after the Bulls got off to that 12-2 start, and the tired Bulls resembled a bunch of sleeping stormtroopers in terms of their effectiveness. Tough to blame a guy when his flight gets in at 4 AM, though. 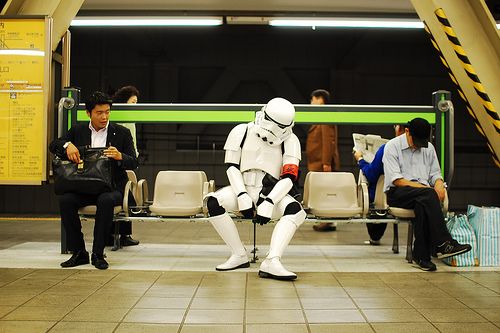 Luketaps Skyzingis is in training, but this is only the first part of the trilogy. He has powerful allies and several of them look to be finding peak form directly when he needs it from them the most as he slips a bit in terms of production as he struggles to get over the hurdles of the famous rookie wall. It seems insurmountable, sure, but BELIEVE IN THE FORCE, LUKE. With it, all things are possible.

Cue credits and the epic music, and yes, I’m going to see Star Wars in a few short hours if you didn’t notice my unrestrained excitement.