Back in the halcyon days of the beginning of the week I found my self thinking, “Maybe Lucy’s right. Maybe these guys are starting to come to an understanding; it’s time to just come together and play. This may not be a playoff team, but there’s no reason it has to be a laughingstock.” 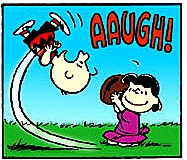 What the hell was I thinking? 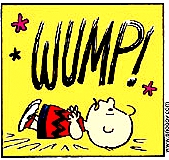 Once again I find myself laying flat on my proverbial back. I’ll be damned if Lucy didn’t pull the ball away right before I could kick it yet again. How could I have been such a fool?

If you’re lucky, you watched the Cowboys and Packers last night, or were out at a happy hour or a birthday party and missed the whole thing. If you’re only partially lucky like me, you got home and turned the game on in the second half and at least were spared the indignity of actually watching Boston build a 50 point lead. I say only partially lucky because I turned on the game, saw the score, yet remained transfixed. I managed to change the channel to Rutgers/Louisville but kept coming back, hoping for an 8-0, 10-0, 12-0, ego-salvaging garbage-time run that never came. A friend of mine once described a similar experience with perhaps Spike Lee’s worst film, Girl 6. “Dave,” she said, “it was so bad I was paralyzed. I couldn’t turn it off. I just knew it couldn’t possibly be this bad. It had to get better. It never did.”

Even Martin Johnson’s sage words from earlier in the day to forget about the Celts and concentrate on the Bucks were rendered immaterial by what transpired at the Watering Hole. You lose by 20-30 points and Johnson’s absolutely correct; you just move onto the Bucks. You lose by nearly 50 and its existential crisis time. With all due respect to the Celtics, scoring only 59 points and losing by almost 50 isn’t about talent disparity. It’s about despair. It’s about a fundamental absence of trust that seems to be ripping apart the spirit of this team–with Thomas and Marbury both outfitted with Freddy Krueger-style finger razors. Hearing Thomas chastise the team for selfish behavior at the post game presser is so rich it’s not even ironic anymore; it’s tragic comedy.

A quick random stream of consciousness… I kept wondering why Q-Rich came up with the “Boston isn’t all that” bulletin board material. It seemed so ill-timed, particularly considering the source. Richardson isn’t Paul LoDuca or Billy Wagner. He’s not especially outspoken, nor is he prone to quotable quotes born out of frustration. But I think I get it now. I suspect those quotes were born from desperation not frustration; a feeble attempt to rally a team falling apart at the seams despite its recent victories. Of course I may be reading too much into that. Maybe he just hates the Celtics.

In any event, those of you familiar with Boston metro’s twisted, spaghetti-style “system” of roads are probably also familiar with the phrase, “you can’t get there from here.” When I moved there in the summer of 2000 I quickly became acquainted with it because it is quite literally true. You can be within eyesight of your destination but simply unable to access it from where you are. I suppose that is a fitting metaphor for our beloved Knickerbockers. We just can’t get there from here.

Fire Thomas? Sure, but it’s deeper than that. If Marbury is allowed to outlast yet another coaching/management regime playing by his own rules he really will be in charge of this franchise. That is a fate worse than anything I can imagine.

Get rid of Dolan. Okay, but how? Why would the owners, who employ David Stern, empower him to rid the league of such an easy mark? Maybe the old man gets involved and cleans house. But that seems less and less likely with each passing loss, given the woeful start.

Get used to the view from on your back Knick faithful. It’s gonna get a whole lot worse before it gets better. Maybe I’ll start my college player watch after the holiday.

Liked it? Take a second to support DCrockett17 on Patreon!

Part-time blogger on the Knicks at Knickerblogger.net and Seahawks at FieldGulls.com. In my free time I hang out at the University of South Carolina and occasionally fill thirsty young minds with knowledge about various and sundry things related to consumer behavior and marketing.